Socialism in Translation: The Challenges of Teaching Communist History in the 21st Century

Let’s say that you want to teach communist history to students whose countries were never under communist rule. It’s an important episode of history to address, especially in the EU, which includes countries from both sides of the Iron Curtain. When you find source material you want to use, where do you start? By translating it, of course.

If you just translate the words in the source and have students look at it from their contemporary perspectives, however, you’re going to be facing a minefield of potential problems. Historical representations of Eastern and Central Europe during the communist period and otherwise so often orientalise it, which is counterproductive to the whole point of integrating these histories within the general history of Europe.

The best way to address these problems, then, is to integrate an element of cultural translation when preparing teaching materials — and to find sources that don’t need an overwhelming amount of explanation. This is particularly important when dealing with the sort of language that the communist regimes employed, because the people reading it and hearing it at the time would have picked up on the linguistic symbols and slogans that they were accustomed to, whereas the same language now doesn’t carry as much meaning for modern audiences.

We’ve seen an example of this in the news recently, when American president Donald Trump referred to the media on Twitter as an ‘enemy of the people’. While we cannot be sure why exactly he chose to use this phrase, it was a red flag for those who have studied the history of Stalinism, as it was one of Stalin’s favorite loaded phrases.

Knowing the mere meaning of the words isn’t enough to grasp the significance of such an utterance in 21st century politics; the cultural and historical weight must be noted for those trying to learn about it from the outside.

Let’s take a look at one of the video clips on our educational website, Socialism Realised. We call this one ‘Girl on a Tractor’, and it’s a clip from a 1950s propaganda film about collectivisation in Czechoslovakia. 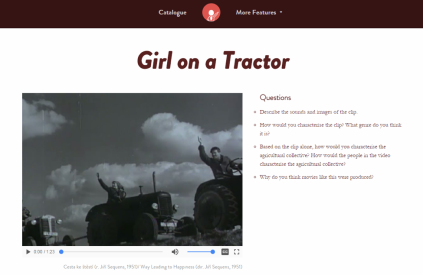 We’ve translated the lyrics in the video, but they’re relatively meaningless to modern audiences in either language. ‘In the sea of air and airplane/ tractor drivers of vast fields’? ‘The farmer worked like a dog/ we’ll plough the old boundaries’? There are, however, symbols hidden in those words that might have meant something to the people who heard them, and they certainly held some significance for the people who wrote them.

The references to airplanes and tractors allude to technology and progress, which was an important selling point of collectivization for those running it. Individual farmers wouldn’t have the resources to purchase tractors, but look at the power of the collective! Without the tractors, a farmer had to ‘[work] like a dog’ inside ‘the old boundaries’ of the fields — which the tractors are now happily ploughing through to create the collective.

And then there’s the music, which is Russian in style and not native to the former Czechoslovakia at all. The resulting image is, of course, of a bountiful harvest and a happy farmer.

Modern students can see the bountiful harvest and the happy farmers, and they can gather that it’s a clip from a propaganda film without any additional information about the symbolism in the lyrics. ‘Girl on a Tractor’ works precisely because it contains elements that were clear enough to all of the audiences that we tested without needing significant cultural contextualization of its language. In order to teach histories of authoritarianism to web users who may be approaching the subject for the first time, this absolutely key.

Take, on the other hand, an example of a source that we ended up cutting out. The newspaper article ‘Who Is Václav Havel’ was published in the Czechoslovak government newspaper in 1989 as a hit piece, portraying Havel as the scion of a rich family who went on to launch a ‘“holy war” against the socialist state.”

When we piloted the article with international students, it launched our focus group into a heated discussion of whether it was a propaganda piece from a socialist state or a laudatory article from a magazine like Time. The language implying that Havel was an enemy of the people, without stating so explicitly, went completely unnoticed by a number of our testing subjects, which showed us that it was not a suitable piece of educational material for our desired audience.

In its place, we decided to feature instead an article entitled ‘Losers and Usurpers’, which has a stronger tone and language that is more blatantly defamatory. No one needs an explanation of the linguistic tropes that communist regimes used in order to figure out that phrases like ‘dogged fight against progress’, ‘unstable and disoriented individuals’, or ‘these usurpers scorn our people’ are meant to be negative. The ability to immediately understand the perspective of the article then allows users to pick up on elements of the communist rhetoric that they might not have known to begin with — the negative connotation of the bourgeoisie, for example, or the vaunted position of the proletariat, thus building a cultural ‘vocabulary’ with which to contextualize the less explicit pieces.

The biggest challenge of putting together our online learning environment was choosing material that could be understood by the broadest possible audience of people who have no experience with authoritarianism. The pieces we’ve chosen, then, are the ones that we believe are best able to get people thinking critically about the period — and those are the ones that needed the least cultural translation. Learning is, however, always a work in progress — so if you’ve got comments about something that we chose to include, we are always happy to hear them.

Lani Seelinger is based in the Department of Education at the Institute for the Study of Totalitarian Regimes, Prague. She is also the co-creator and curator of Socialism Realised, an online learning environment aimed at forging a deeper understanding of the lives of the people in communist regimes, and a comparison of these experiences to the present. You can find Socialism Realised on Twitter at @SocialismR.

View all posts by authlanguage